Cabaret in the Loft

Growing up, Mark Evans was gay, chubby and certainly not interested in the same hobbies as the ‘normal’ boys. He ensured people saw him as “The Performer.” This brought comfort, safety and…a bucket load of trauma to sing and laugh about later. Hide & Seek, a solo cabaret by the Broadway and West End performer, is a hilarious and touching show dedicated to anyone who seeks to bring their true selves to the surface.

Mark Evans performing at the Artists for World Peace gala

Mark Evans is a renowned actor, singer and dancer with a large variety of Broadway and West End credits to his name.

Born and raised on a sheep farm in North Wales, Mark was not like the other kids around him. Gay, chubby and certainly not interested in the same hobbies as the “normal” boys.

Thankfully, he fell in love with singing; Wales is considered ‘The Land Of Song’ after all. Music became an escape from real life. Mark ensured people saw him as “The Performer” and hid away every other side of him. This brought comfort, safety and….a bucket load of trauma to sing and laugh about in a cabaret three decades later.

Hide & Seek is a hilarious and touching show dedicated to anyone who seeks to bring their true selves to the surface.

Mark is excited to debut Hide & Seek, his first solo show in over a decade, at the South Orange Performing Arts Center where he recently starred in the world premier musical The Last Supper delivering a tour de force performance playing twelve different characters to huge acclaim.

Through great music, fun stories and a glimpse into a side of him you have not before seen, ‘Hide And Seek’ will be a night of thrilling entertainment not to be missed. Music direction and arranging by Garrett Taylor.

Mark’s Broadway / West End / Theatre credits include lead roles in: Mrs. Doubtfire, Waitress, The Play That Goes Wrong, Wicked, The Book of Mormon, Ghost The Musical, Oklahoma, The Rocky Horror Show, High School Musical, I Married An Angel, Me And My Girl,  Mary Poppins, Singin’ In The Rain, Finian’s Rainbow, SPAMalot, and many more.

Mark released his debut album The Journey Home – Deluxe edition in the fall of 2012. He co-authored the book Secrets Of Stage Success with his Wicked co-star Louise Dearman which was first published in 2015.

Mark happily resides in West Orange, NJ with his husband Justin and their daughter Larsen.

About Cabaret in the Loft 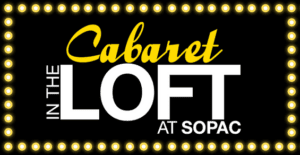 SOPAC’s Cabaret in the Loft series is a 54 Below-esque experience, west of the Hudson River. The club-like atmosphere of the SOPAC Loft is perfect for this intimate series. Performers in the series live in the greater SOMA area, which was appropriately named the place “where Broadway comes home to sleep” by the New York Times.