For over a decade, The Moth Podcast has consistently ranked at the top of the iTunes charts and has been downloaded by dedicated listeners 68 million times each year. New York’s “hottest and hippest literary ticket” makes its live SOPAC debut in an evening of simple, old-fashioned storytelling.

The Moth began on a back porch in small-town Georgia, where the founder—poet and best-selling novelist George Dawes Green—would spend sultry summer evenings swapping spellbinding tales with a small circle of friends.

There was a hole in the screen, which let in moths that were attracted to the light, and the group started calling themselves “The Moths.” When he moved to New York City, George wanted to recreate the feeling of those nights in his adopted city. The first New York Moth event was held in George’s living room. But word spread fast, and the events soon moved to cafes and clubs throughout the city—and soon to popular venues throughout the country and beyond.

Since its founding, The Moth has presented more than fifteen thousand stories, told live and without notes, to standing-room-only crowds worldwide.

The Moth Mainstage is a live, curated event featuring five tellers who have developed and shaped their stories—it’s a community where entertainment and enlightenment emerge. 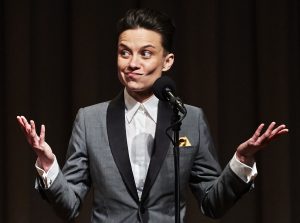 TARA CLANCY is a writer, comic and actor. She is a frequent host of The Moth Mainstage shows and has told stories on The Moth Radio Hour, NPR’s Snap Judgment and Risk! Her writing has been published in The New York Times, The Nation, The Paris Review Daily and The New York Times Magazine. She appeared on HBO’s Girls and High Maintenance, and has been a panelist on NPR’S Wait, Wait… Don’t Tell Me! Her memoir, The Clancys of Queens, was a 2016 Barnes and Noble Discover Great New Writers pick. More info at www.taraclancy.com

BRITTNEY COOPER is author of the New York Times bestseller Eloquent Rage: A Black Feminist Discovers Her Superpower. She is also author of the award-winning Beyond Respectability: The Intellectual Thought of Race Women, co-author of Feminist AF: A Guide to Crushing Girlhood and co-editor of The Crunk Feminist Collection. Brittney is Associate Professor of Women’s, Gender, and Sexuality Studies and Africana Studies at Rutgers University. She is a contributing writer for The Cut/New York Magazine, a contributor at Black News Channel, and a frequent commentator on MSNBC.

Born and raised in Plainfield, New Jersey, CHRISTIAN ESTEVEZ is the son of immigrants from the Dominican Republic. Christian graduated with a double major in Labor Relations and Latino Studies from Rutgers University, where he has taught classes focused on Latino Workers in the United States. He was an activist while in college, serving in leadership positions of several organizations, including as Co-Chair of the Latino Student Council. In 1996 he transitioned from student organizing to community organizing as a co-founder of Pa’lante, a local social justice organization. Christian helped organize New Jersey’s first statewide Latino Leadership Conference in 1999. Christian began his career in the labor movement when he was hired by the New Jersey State AFL-CIO in 2001. In 2009, Christian went to work for Communications Workers of America (CWA), Local 1037, working his way up to Executive Vice President. That same year, he helped found and currently serves as President of the Latino Action Network, a statewide social justice organization. In 2021, Christian went to work for the National CWA where he now serves as the New Jersey Legislative & Political Director for District 1.

Cited by Oprah Magazine as “one of our favorite creative thinkers,” DION FLYNN is a writer, speaker, workshop leader, improvisor, humorist, actor, and U.S. Army veteran. Dion’s comedic writings and inventions have appeared on MTV, VH1, Logo, The Tonight Show, Paid-Off, Late Night with Jimmy Fallon and more. He wrote and performed the highly acclaimed solo show The Only Brown Kid In The Trailer Park and is currently working on his debut publication (working title) Improv: The Basics of Connection with Central Recovery Press. He holds an MFA in acting from New York University and lives in Brooklyn, NY, with his lovely and hilarious wife and their beloved son (who’s also funny). His short plays Spider Smoke and Detective Story debuted at the Tiny Arts Festival in West Fulton, New York in 2021. As a workshop leader, Dion is masterful at using fun and innovative ways to help people connect with themselves and others. Dion has led hundreds of business professionals, writers, college students, sales people, recovering- and non-recovering folks through his dynamic Improvisor’s Mindset Workshops. ImprovisorsMindset.com | DionFlynn.com

DONALD HARRISON is a Philadelphia-based writer and pianist. He has an MFA in Creative Writing from the Michener Center at the University of Texas at Austin and has worked as both a writing teacher and a learning experience designer. He plays and sings every Friday night at Tavern on Camac in Philadelphia and has performed as a storyteller and accompanist in venues around Philadelphia and New York City.

NANCY MAHL is a full-time housewife/stepmom to twin teenagers and a retired elevator inspector who finds joy in the small moments. When she’s not driving someone to track practice, she makes art, rescues kittens, and enjoys amateur gunsmithing. She used to race sailboats, ride a motorcycle, and skydive, but now gets her adrenaline rush by speaking in public.